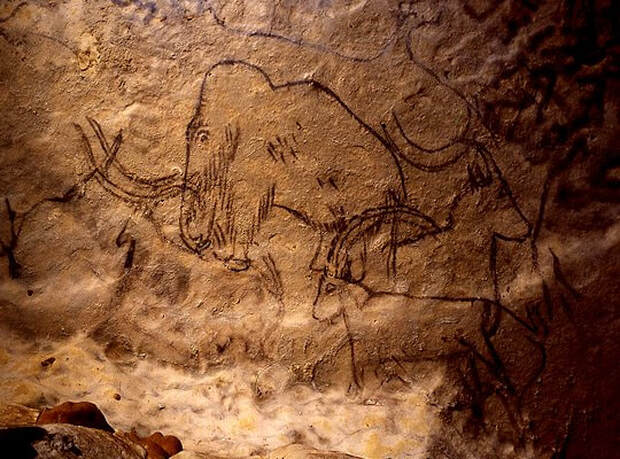 More about the proposed caves :


Bernifal
Privately owned by a local farmer, this is a magical experience because of the cave itself with its dripping stalactites of all shapes and sizes, and its art of the Magdalenian period (approx. 20 000 yrs. here) including mammoths, aurochs, horses, bison, a wonderful bear, many geometric symbols, and an exceptional human portrait. The ceilings are towering high in some areas whereas other areas can be very confined and low.
The 500 meters walk through the woods to the entrance is enchanting. There is no electricity in the cave which means that the visitors approach the images one by one as they go along, sometimes deciphering them with difficulty, almost as though they themselves were the first discoverers. The dark and the effort brings them close to these ancient times. It’s this intimacy in an unspoiled environment that makes this a very unique experience. Mystical.
(Christine chooses to limit the number of people per visit to 6 or 7, because of certain narrow and fragile passages that need to be protected).


Rouffignac
Also privately owned by a local family, this cave is the largest of all. The galleries extend over a total of about 8 kilometers, 2 to 3 of which were frequented by the Paleolithic artists around 16 000 years ago. Christine particularly admires the art here because it is reduced to outlines, these are drawings. The animals are so perfect in their minimal simplicity, each with their individual anatomy, character and expression, reminding her of great artists such as Matisse or Picasso.
The 160 mammoths drawn and engraved on the smooth walls make this the most important cave in the world for mammoth depictions. There are bison, ibex, magnificent woolly rhinoceros and horses as well, and some very caricatured human faces tucked away in less accessible areas, not open to the public. There are finger drawings forming non-figurative designs which cover surfaces adding up to 500 square meters. These mysterious meandering finger lines are traced on decomposed fragile wall surfaces, where you can still sink your fingers a centimeter deep. It’s a miracle that they have survived. Some of the animals are also finger-drawn.
Because it’s such a huge cave, the visit takes place on a small open electrical train covering about one kilometer, at which point we can get off to admire the famous Black Ceiling with its marvelous 67 animals all concentrated within a circular space crowning a deep, and significant, sink-hole. The homogeneity of the art is such that it seems clear that the work was performed at the same time by very few artists, perhaps two or three.
Groups can be of any size here since the small train can take 32 people. The train system is the most efficient way to preserve the art.


Font de Gaume
Font de Gaume is the only cave with polychrome paintings still open to the public, since both Lascaux and Altamira (Spain) are now closed for preservation reasons. What is meant by “polychrome” is that the colours are not simply used in their primary form as in other caves but are mixed into a variety of subtle shades. Grinding material and stone palettes existed during the Paleolithic. Different techniques are used for special effects and textures: brushwork, drawing, engraving, and spraying colour through fine blowpipes.
Bison largely dominate the subject matter. Long lines of them, forming groups or face to face, always with peaceful attitudes as if gathering or meeting. There are mammoths superimposed on some of the bison, either finely engraved or painted. Reindeer are rarely depicted in the caves, but this cave has several, notably the famous emblematic “scene” of two large reindeer face to face, one of which is licking the other’s forehead. Amongst the horse figures, there are two large ones, the one behind with its forelegs leaning on the rump of the one in front. The images can be large or small, figurative or geometric symbols, alone or in most cases forming complex superimpositions.
The subtlety of colour, the gentleness of the animals’ manner and the remarkable osmosis between the figures and the cave’s shapes make this a memorable visit.
One wonders which is more important: the paintings, or the cave itself?
Are the animals there to animate the sacred cave, or is the rock bringing to life the animals?
These are questions that apply to all the caves.
(The visits are limited to 12 people).


Abri de Cap Blanc
Cap Blanc is also a unique site. It’s an open-air cliff shelter which has three rarely combined functions: a habitation frequented over thousands of years, a burial site, and an extraordinary art site. It is the only site with a monumental sculpted frieze open to the public.
Whereas the walls inside a cave are never altered or sculpted, the rare out-door shelters with art reveal the remarkable talent that these Paleolithic artists had for sculpture, whether high or low relief carvings. Few and far between are those that have survived out-door preservation conditions, Cap Blanc being the only one open to the public.
The frieze, around 17 000 years old and 14 meters long, represents a group of horses, bison and possibly aurochs. It is carefully composed around a symmetrical layout of 5 large horses. The central horse facing the left is life-size and is framed by two pairs on each side facing the right and shown in perspective, one behind the other. The depth of the carving brings out the spectacular central horse remarkably. Although the legs were destroyed during the early excavations, one can easily see the muscles of where they joined the massive chest and belly. Under a light coming from an angle one can see its full body’s musculature, the neck, the rump and tail, and even the two ears twisted at different angles. It is so perfect that it looks alive. Technically, in Christine’s opinion, it is as good as a Michelangelo…
Once again, the natural postures of the animals, their realistic proportions and peaceful interactions leave the visitor with a sense of harmony and perhaps a little closer to the artists’ possible message.
This is the only site where the artists’ ability for deep carving and sculpture can be appreciated.


Combarelles
Combarelles offers an altogether different experience: it consists of a single 250 meters-long gallery winding its way through the rock, so narrow and low that the Magdalenian artists had to crawl all the way, and yet there are more than 600 engravings lining the walls. Naturally the visitor doesn’t have to crawl since the floor level was lowered about ten years after its 1901 discovery. However, the cave’s narrow passages oblige the visitor to enter single file and frequently stoop down under dripping stalactites on the way.
It's in this cave that one can see the greatest variety of subject matter: bison, horses, aurochs, ibex, mammoths, bear, lion, rhinoceros, a large variety of geometrical symbols and an exceptional number of anthropomorphic figures from simple vulvae or phallic imagery, to mask-like faces, and disproportioned, incomplete or caricatured human bodies.
The art covers a period between approximately 17 000 and 14 000 years.
Because of floods and the high level of humidity the once existing paintings have nearly all disappeared, but a crust of calcite fortunately formed and protected the finely engraved lines.
The anatomical details of the animals are remarkably true to life, even of the same species each is different from the next, and not caricatured, contrary to the “human” depictions. It is a wonder that such accuracy could have been accomplished seeing the confined conditions that the artists’ were working in, close to the walls and crouched down in difficult positions.
(The number of visitors is limited to 7 people per visit)

Cougnac
Cougnac is south of the Dordogne river, in the Lot region. The cave itself is a fairy land filled with myriads of crystal stalactites and stalagmites, the deeper one goes the more delicate and sparkling. It’s the most beautiful cave of all. And there is also magnificent art in this cave, older for some paintings by about 10 000 years than those described above. There are several dates to the art, separating certain figures by as much as 10 000 years if not more.
The depictions are mainly of ibex, mammoth, megaloceros (a kind of giant ), complex signs and anthropomorphic figures. The largest panel shows three impressive megaloceros (two males and one female), many ibex, a mammoth, and a strange “human” body from the waist down, in a walking position. Further along is a very complex composition of a large mammoth with a smaller one inside, as well as a strange disproportioned “human” with a long torso, tiny arms, a bird-like head and a geometrical aviform symbol emerging from it. Very mysterious.
Because of the depictions of megaloceros and the complex aviform symbols (like wings stretched out from a central square) that both Cougnac and Pech-Merle share, it is thought that they are both connected culturally.
The colours are brilliant, especially the red ochre.
There are dozens of mysterious black and red finger markings either surrounding the figures or on their own. In a special separate area tightly filled with a maze of sparkling concretions there are hundreds of these finger markings, and no figurative art at all.
(Larger groups can visit this cave)


Note: The first five of the above-mentioned cave art sites are described in detail in Christine’s book “Stepping-Stones: A Journey through the Ice Age Caves of the Dordogne” published by Yale University Press.