Christine Desdemaines-Hugon has been giving tours of the Ice Age caves of the Dordogne (France) for over 30 years now. She is an accomplished archaeologist specialized in the art of the Palaeolithic, and her lectures on the various cultural phases of this vast period furthermore bring to life the living conditions of those times: climate, tools, weapons, art objects, body ornament, habitations, and more.


The Dordogne is world-famous for its cave art. It is here that there is the greatest density of art sites, particularly in the Vézère Valley, around the small town of Les Eyzies-de-Tayac. This is also where there is an uninterrupted 350 000 years-long sequence of prestigious excavation sites the names of which have been given to long cultural epochs.


Most visitors will have heard about the famous Lascaux cave, now closed to the public and of which an excellent copy has been made. Few realise however that there are authentic caves still open, but for how long? These are Christine’s priority, despite the fact that visits for most of them have strict time schedules and a limited number of entries. It’s hard to get into these very special caves, but well worth the effort! 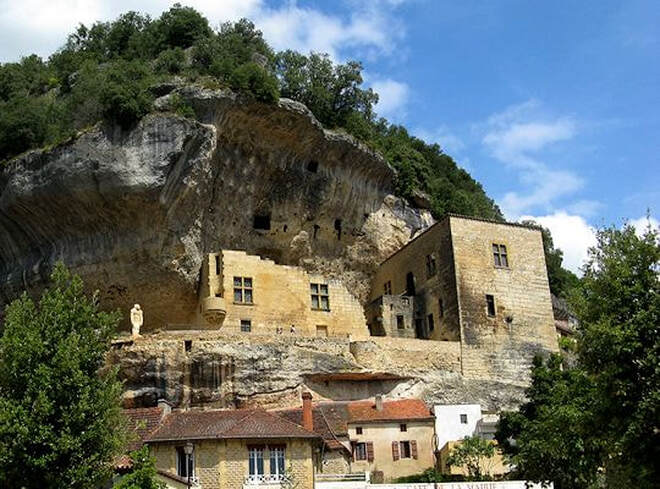 More about Christine Desdemaines-Hugon :
​
Christine spent her childhood in London and went to the Lycée Français there for her education. She then studied art at Saint Martin’s School of Art, in London, before crossing over to France to study interior design at the Ecole Nationale Supérieure des Arts Décoratifs in Paris.

Her destiny as an artist and interior designer took an unexpected turn when she discovered the cave paintings of the Dordogne, and, fascinated by their beauty, felt the urge to know more about Ice Age times. Chance would have it that her French artist husband and she had bought an old ruin of a farm in the middle of a forest bordering the Vézère Valley. This property turned out to be right next to a famous Neandertal child’s burial site called Le Roc de Marsal.

​ In the course of restoring the farm and digging the vegetable garden they were finding stone tools dating back to 70 000 years! Intrigued by these, Christine went to the nearby Musée National de la Préhistoire to learn as much as possible about Neandertal technology, and saw this as another sign reenforcing her desire to become an archaeologist.

As soon as her three daughters were in their teens, she went back to University to study archaeology, anthropology, paleontology and prehistory, completing thesis work at both Bordeaux 1 University and at the Ecole des Hautes Etudes en Sciences Sociales in Toulouse.

During her studies she had the privilege of excavating the nearby La Micoque site (350 000 years old), and spending extensive time at the Musée National drawing and analyzing hundreds of exquisite designs engraved on bone and antler objects dating back to around the 16 000 years period of the Magdalenian.

Over the years the cave art has remained a true passion for her, and exploring all its complexities, the variability of technique, the artists’ ability to transcribe perspective, movement and expression, surprisingly similar to contemporary art forms, offers the viewer a unique opportunity to understand something of these ancient societies.

The recognition of the sophistication of the art gives us a picture of the remarkable quality of Ice age cultures, quite in opposition to the all too popular caricatures of so-called “primitive cave-man”. These fine paintings, engravings and drawings which cover a period of about 30 000 years, from around 42 000 to 12 000 years BP, are a permanent source of inspiration and joy, albeit their unfathomable mystery.
​
Visiting the caves is an unforgettable experience, not only aesthetic but also spiritual, mystical.

For over 30 years now Christine has been organizing tours of the authentic caves and giving lectures on Ice Age times to university and museum groups, as well as to the far more numerous individual visitors who plan a trip to the Dordogne.
Time flies !

Christine Desdemaines-Hugon's book about the art and the evolution of humankind 'Stepping-Stones: A journey through the Ice Age Caves of the Dordogne" is published by Yale University Press.